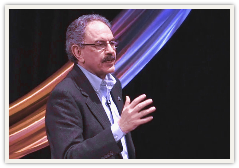 What Does “The Living God”

Parable of the Sower

The Feasts of the Lord

A Jew with a Message about Jesus

Dedicated to reaching the lost sheep of the House of Israel, Jeffrey D. is a full time traveling evangelist who has ministered in hundreds of churches and messianic congregations across the country for more than 29 years. His vision to see Jewish people come to know Yeshua, the Jewish Messiah is being fulfilled before his eyes.  This vision also goes forth through the radio program, Messianic Minutes, which has been heard on hundreds of Christian stations.

Judaism to Atheism to Jesus

Born and raised Jewish, Jeffrey D. turned away from God at an early age becoming an avowed atheist. As an adult, he thought his secular humanist ways were the key to his exciting career in broadcasting. But in 1983, at the age of 36, Jeff had a miraculous encounter with the living God and surrendered his heart to Yeshua, the Jewish Messiah.

Six years later, the Lord confirmed a call He had given Jeff while visiting Israel, to travel the country telling the Jewish truth about Jesus.

Listen to the Daily Program

Well, it’s in the Bible. The birth of Yeshua, the Jewish Messiah, was the most Jewish event which had ever taken place up until that time. Unfortunately, what’s not in the Bible is that His birth was on December 25th. Perhaps that’s because God wants us to celebrate Jesus’ life, death and resurrection every day of our lives.

Nevertheless, the core of what happened on the day of His birth (whenever that was) provided the culmination of promises God made to His Jewish people. Similarly, His first days on earth were governed by Jewish law.

Furthermore, while they were in Jerusalem, the Jewish man Simeon held Baby Jesus, prophesying He was the Messiah. That was echoed by the Jewish prophetess Anna, who then spread the word throughout the city.

As we’ve often said, Yeshua came as a Jew, to the Jews, to fulfill the Jewish prophecies and scriptures. His glorious birth fits right in, and it’s a truth our unsaved Jewish brethren need to know.

As described in Luke Chapter 2, the commands of the Torah, in both Leviticus and Exodus, were followed by Joseph and Mary. Yeshua was circumcised on  the eighth day - you don’t see that in any Christmas pageant. Mary observed the days of her purification, then they brought the Child to Jerusalem to dedicate Him to the Lord, and offered a sacrifice.