In Deuteronomy 30:19, God spoke through the Prophet Moses a challenge. He said, “I call Heaven and earth as witnesses today against you, that I have set before you life and death, blessing and cursing; therefore choose life, that both you and your descendants may live.”

Furthermore, chai has a monetary significance in Jewish culture. Since the Hebrew alphabet is alpha-numeric (the letters have a numeric value), the sum of the yod and chet which construct the word chai is eighteen. As such, the number eighteen is given spiritual significance. Jewish gift giving is often based on multiples of that number.

There is an Israeli slogan, which has also been made into a song, Am Yisrael Chai! It means, The People of Israel Live! Many sources attribute the origin of the phrase to a stirring event at the liberation of a Nazi concentration camp in Germany. In a BBC recording,  survivors are heard singing, followed by the shout of a Jewish chaplain from the liberating British army. He proclaimed, “Am Yisrael Chai!”

Despite all the attention Jewish people give to the chai and chaim, they are missing the most important connection to God’s will. In John 10:10, Messiah Yeshua declared, “I have come that they may have life, and that they may have it more abundantly.”

Completed spiritual life is the key, and to have that, as Jesus said, we must be born again. In John 3:3, He unequivocally stated, “Most assuredly, I say to you, unless one is born again, he cannot see the kingdom of God.”

So we continue to pray and work for Jewish revival. May it be that the next time my Jewish brethren lift a glass saying l’chaim, they will add, praise Yeshua for life!

Many will remember that spirited song from Fiddler on the Roof, To Life. It’s opening lyrics, “To life! to life! l'chaim! L'chaim, l'chaim, to life!” and catchy melody may be resonating in your memory right now.

Take note the Hebrew letter chet is spelled with a ch in English, but is pronounced with a guttural sound like the German achtung or the composer Bach.

The song is based on a

people are sharing a

glass of wine, both in

you have health and

well being, is of course

found in many other cultures.

While there are a few suggestions regarding the ancient origin of the toast, many believe it is based on the potential effects of drinking wine. Since drinking too much can have negative consequences, the toast expresses a hope for a positive outcome. On a simpler level, the words “To life” meaningfully stand on their own. 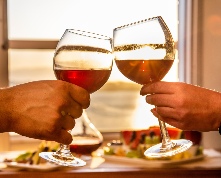 There are a number of times Jesus identified Himself as the one and only Savior, the Messiah. Of course, every one of those was a reference to the Hebrew Scriptures and the promise of God to His Jewish people.

One of the most direct is found in John Chapter 5 where Yeshua is chastising the Jewish establishment for unbelief after He infuriated them by calling God His Father. After meticulously explaining He did nothing on His own, but only by God’s direction, He cited Moses. In verse 46 He challenged, “For if you believed Moses, you would believe Me; for he wrote about Me.”

Among those messianic prophecies in the Torah, the Books of Moses, Deuteronomy 18:18,19 is particularly cogent: “I will raise up for them a Prophet like you from among their brethren, and will put My words in His mouth, and He shall speak to them all that I command Him. And it shall be that whoever will not hear My words, which He speaks in My name, I will require it of him.”

This passage stipulates the coming Messiah will be a Hebrew (Jewish) Prophet. He will be like Moses, from among the children of Israel. This is a critical identifier that Yeshua is the Jewish Messiah.

Moses explains His words will carry power, even the weight of life and death. Those words will come directly from God. While that is the case with all true prophets, this one will speak with a stronger authority. The phrase, “I will require it of him.” (the ones who don’t heed the words of Messiah), suggests facing the judgement of God. Indeed, the Jewish Apostle Peter makes the same citation in Acts 3:22,23 as he scolded and encouraged a crowd of his fellow Israelites.

On a number of occasions, Jesus used Deuteronomy 18 to distinguish Himself as the Messiah. For example, in John 15:15, mirroring God’s “ I will put My words in His mouth, and He shall speak to them all that I command Him,” He said, “ . . .  for all things that I heard from My Father I have made known to you.”

His disciples all knew the promise of Deuteronomy 18, they, along with all Israel, were waiting for the day of its fulfillment. When Yeshua aligned Himself with that promise, it was a further proof He was the Promised One of Israel.

The root word chai, meaning live, or alive, has other cultural significance in Judaism. The Hebrew letters which compose the word chet and yod, are often worn as a pendant necklace necklace, it seems especially by men. While it is always a good idea to celebrate life, display of the chai is quite possibly based on Scripture.